I haven’t always been a fan of character classes in RPGs (e.g. fighter, thief, wizard), but ultimately, my issue has been with needlessly complex leveling mechanics and the over-compartmentalization of character abilities. Yes, I prefer skill-based RPGs. But even in skill-based RPGs, it’s helpful to have a guideline for character advancement and to identify a character’s strengths, what sets them apart from other characters. For this, character classes—or roles, archetypes, playbooks, whatever you’d like to call them—can prove helpful. Character roles in RPGs can also help players by providing characters with background, motivation, even personality. In this regard, the playbooks of PbtA games work really well. Playbooks not only provide characters with unique abilities, they create the structure of a character’s purpose upon which to build a character-driven (rather than action-driven) story. Even D&D—who set the standard for character classes and leveling mechanics—flexed its storytelling muscle in 5th Edition by making backgrounds an integral part of character creation.

In Tempeste, I’ve decided to call roles ‘professions’, at least for now. (I may need to use a different word later, as the initial ‘professions’ will be subsets of a broader mercenary role, and I envision future non-mercenary roles. I may, in fact, use ‘classes’ for the broader categories, e.g. mercenary, aristocrat, civilian, etc., as social classes play a significant role in the Tempeste world. But I digress…) Although I appreciate the way that playbooks encapsulate character creation, I envision Tempeste character creation requiring a few separate questions, each carrying its own weight: What’s your character’s profession? To what mercenary company do you belong? And in what city were you born and raised?

Let’s start with professions and explore one of the initial sixteen (mercenary) professions in Tempeste: the Angel. For those familiar with Apocalypse World, you might think I’m lifting a concept from AW playbooks, but I don’t envision Angels as medics (although they’ll have the ability to pick up medical skills through advancement). No, Angels are unique support characters—and I mean support in a tactical sense. In military slang, ‘guardian angels’ are soldiers “placed in a high position in urban warfare to provide overwatch and cover to friendly units moving below” (source: Wiktionary). I decided to shorten ‘guardian angel’ to ‘Angel’, but otherwise, I couldn’t have asked for a more fitting, unique mercenary role in the Tempeste world. Let me tell you why—and this is, of course, why I choose to explore this role first (not because it’s first alphabetically).

As the name suggests, Tempeste is a world of storms and a world of hostile environments, more generally. Most people live within heavily fortified cities. Monumental city walls form an important barrier between cities and the hostilities of nature, thus cities have grown vertically more so than horizontally, with multiple ‘street levels’ and towering structures-built-upon-structures. Inevitably, mercenaries conduct many and varied military operations within cities, making urban warfare an integral aspect of the game—and amidst a complex cityscape, it’s generally a good idea to have someone providing cover from above. 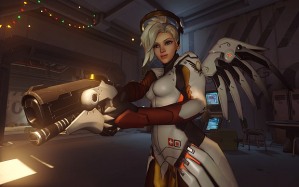 I also want professions, like PbtA playbooks or backgrounds in D&D 5th Edition, to offer insight into a character’s personality as well. It makes sense that protectors be appreciated by the protected, yes? Yes, but with a mix of envy and jealousy. Or perhaps Grunts on the ground have come to take their Angels for granted? My partner plays MOBAs (Multiplayer Online Battle Arenas), and from what I understand, support characters are some of the most criticized and under appreciated characters, especially by those on the front lines. Although the social dynamics of hardened mercenaries likely involve more nuance and respect than that exhibited by many online gamers, I imagine Angels nonetheless find themselves a step removed from their comrades. Angels must find satisfaction in their work, regardless of praise or blame, and perch like stone cold gargoyles upon the parapets.

As promised, this should inform what base attribute(s) will be most important to an Angel. Physique may be of some importance. The need to move quickly and possibly climb walls to reach higher vantage points requires athletic talent. But an Angel’s duties rely most heavily upon Discipline, the ability to aim, to watch carefully, to keep one’s cool and know when and where to shoot to provide cover or to create a diversion. Nerve sounds like it might be helpful (Discipline and Nerve have overlapping connotations), but Nerve serves primarily a social attribute, and for reasons mentioned above, Angels aren’t the most social characters. Similarly, their need for Artifice is minimal. Where a character needs Nerve to run headlong into battle, or Artifice to fast talk one’s way past a few guards, Discipline allows one to wait patiently, alone, unseen.

What do Angels need to do that not all mercenaries do? Let’s consider actions unique to Angel characters.

Any character can hide or use a firearm, but an Angel has the unique ability to use distance weapons for specific effects from a concealed location. Although use of this ability doesn’t require an Angel to be from a higher vantage point (through a window or around a corner might work), being above the action certainly provides options that being ‘on the ground’ does not. So the Angel makes a single roll (not separate stealth and attack roles as one might be required to do in a different RPG). If the Angel is successful (and possibly depending on how successful), then they can choose from a number of effects:

If the roll fails (and again, depending on what degree), then the GM decides, based on the narrative: either the Angel is spotted by the enemy, allies on the ground are cornered, or gunfire results in an unexpected consequence (“Oops, I didn’t see those propane tanks!” Explosion, anyone?) And yeah, this is definitely a Discipline-based action.

I don’t know that this ability would be unique to the Angel, but an Angel should certainly be better at it than most. Navigating unfamiliar cities can be difficult, especially when time is of the essence and one is trying to find higher ground, which may involve entering buildings, rooms, balconies, or rooftops where one isn’t normally permitted. While a GM may require an Artifice roll to get into a high security building or a Physique roll to physically climb to any dangerous height in a storm-ridden world, in any area inhabited by civilians where multiple vantage points may be found, Discipline works as an all-encompassing ability to assess one’s surroundings and find a suitable option. Obviously, failure could have all sorts of consequences…

I know at some point I had a third idea, but I’ve walked away from and returned to this post a few too many times (so it’s taken me a lot longer to write this than it should have). But this is the sort of brainstorming blog post which I should get into the habit of writing, and after a few of these, I suspect rules will start to write themselves. Do you have ideas you’d like to contribute? Please, comment below or message me! Otherwise, stay tuned for more to come.

This site uses Akismet to reduce spam. Learn how your comment data is processed.